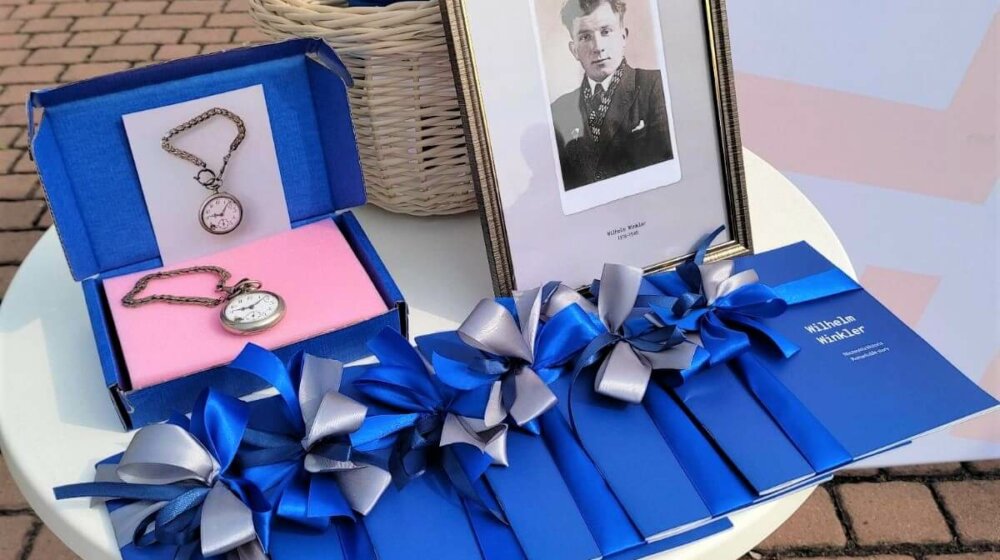 The Arolsen Archives are opening a new #StolenMemory exhibition today, in the hope that it will help them find the descendants of eight concentration camp prisoners from Poland who were deported by the German occupying forces. One search came to a successful conclusion even before the exhibition was opened in Żory (near Katowice). Relatives of Polish forced laborer Wilhelm Winkler were traced, and the pocket watch that the Nazis took away from him on his arrest has now been returned to his family.

“Wilhelm Winkler’s relatives had been searching for information about his fate for a very long time,” reports Elżbieta Koczar from the Żory Municipal Cultural Center. Koczar has been working in partnership with the Arolsen Archives to organize the new #StolenMemory exhibition in the Silesian city. The project aims to trace the relatives of former concentration camp inmates from Poland in order to return property to them that was confiscated by the Nazis; these objects are known as “effects.”

It is thanks to a happy coincidence that the Arolsen Archives were able to return one of the mementoes even before the exhibition opened. Winkler’s sister Elżbieta Michalik had already attempted to find out what had happened to her big brother, but she started a new search only this spring. At about the same time, Elżbieta Koczar from the Cultural Center in Żory started preparing the #StolenMemory exhibition and learned that the Arolsen Archives were looking for Wilhelm Winkler. Without further ado, she began to search herself and came across an inquiry from Winkler’s sister only a few days later. It was “a tremendously moving experience” for the family to have his pocket watch back returned to them, explained Elżbieta Koczar.

»For Wilhelm Winkler’s family, having his pocket watch given back to them as a keepsake was a tremendously moving experience.«

Winkler fought against the Nazis

Born in Szeroka (Upper Silesia) on April 26, 1916, Wilhelm Winkler was a machinist by trade. He joined the Polish Army in 1937 and fought as a soldier against the Nazi invaders in 1939. He was the only member of his family not to sign the list for Volksdeutsche (ethnic Germans) in 1939, which would have enabled him to obtain German citizenship. When the Germans captured him in Dęblin, they forced him to work in Ahlen/Westphalia from October 1940 on.

In the spring of 1944, he returned to Poland for the last time on a leave of absence to attend his sister Marta’s wedding. Then, in the middle of the year, he ran away from his place of employment. The Nazis arrested him in Bielefeld a little over a month later and took him to the Neuengamme concentration camp in Hamburg. They registered him as a political prisoner under prisoner number 54 162 and confiscated his pocket watch. The last entry in the surviving records about him is dated January 6, 1945. Then the trail goes cold.

525 effects have already been returned

“It is a real success that we were able to give back one of the personal effects even before the #Stolen Memory exhibition opened in Żory,” comments Anna Meier-Osiński, Head of Outreach Eastern Europe at the Arolsen Archives. Since the #StolenMemory campaign was first launched, the relatives of 525 individuals whose personal effects were stored in the archive have already been found. This number includes the families of 110 concentration camp prisoners from Poland whose personal property is now back where it belongs.

“We make every effort to return their belongings to their descendants, and we are happy when we succeed,” says Meier-Osiński. The Arolsen Archives currently still hold the personal belongings of around 800 persecutees from Poland.

The #StolenMemory exhibition will be on display at the Market Square in Żory (Rynek w Żorach) until August 26, 2021. As well as presenting eight open search cases, it also includes a panel that tells the story of Wilhelm Winkler.