Welcome to the family 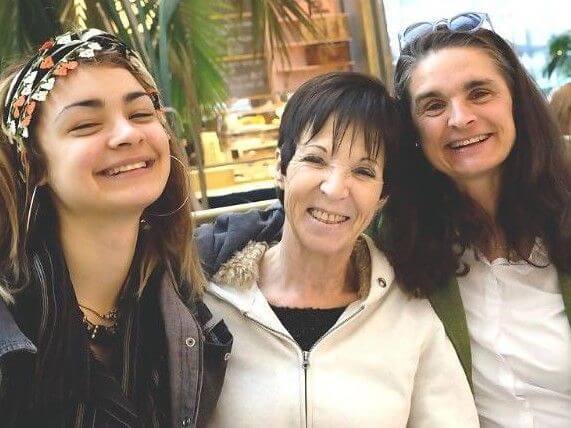 It could be a completely ordinary scene: three women of three generations sitting in a shopping center. Talking about their family, about memories, laughing a lot. For these three, however, the gathering is anything but normal, because they’ve only just found each other. It’s Mirjam’s first visit from Germany to her ‘new’ family in Tel Aviv.

“We could only chuckle about our outward resemblance,” says Mirjam, recalling her arrival at Tel Aviv airport. All of a sudden, there were relatives with the same facial features, the same way of walking, the same smile. For a long time, they hadn’t known of each other’s existence. After his liberation from the Dachau concentration camp, Mirjam’s grandfather Abraham had had a wife and daughter in Germany but had emigrated to Israel without them a short time later. Then they lost contact. Mirjam wanted to learn more about his fate and asked the International Tracing Service (ITS) for help finding answers. The research revealed that her grandfather, a Polish Jew, had first survived the Litzmannstadt Ghettoestablished by the German occupiers (in present-day Lodz, Poland), and then the Auschwitz and Dachau concentration camps. The U.S. Army liberated him in the Allach subcamp. He died nearly sixty years later—in 2007—in Israel.

An Israeli relief organization helped the ITS with the search and soon found out that Mirjam’s grandfather had a son and another daughter in Israel. “It was a huge surprise for me,” Yaffa recalls, thinking back to the moment she learned about her relatives in Germany. “Welcome to the family! That was my first thought!” Yaffa immediately got in touch and, to Mirjam’s great delight, the initial telephone calls soon developed into a regular exchange. The following year, Yaffa and other members of the family came to Germany. Mirjam’s children, sister and mother also took part in that special family reunion. “The hours were filled with exchanging memories and various anecdotes. We were all surprised by how quickly we felt familiar with one another. It was extremely moving and powerful,” Mirjam recalls. Then, in February 2019, she and her children travelled to Tel Aviv to meet more of the relatives. It was an “enriching and pleasurable trip” for them all; among other things they visited Abraham’s grave. For Yaffa, it was also a very special time. “I only have one brother, but not many cousins, because they all perished in the Holocaust. Now it’s wonderful to have such a big family.” Further family gatherings are already planned. This coming summer, Mirjam’s daughter plans to visit her ‘new’ cousin in Tel Aviv, who already has a firm place in her heart. For Mirjam, the family reunification is “still very exciting and very special. And now the story is continuing! Very warm thanks to the ITS once again for all their work and research!”

More than seventy years after the end of the war, people with Jewish roots in Germany are once again living in fear of repression. One of them is Mirjam, who lives in a town with an active radical right-wing milieu. To protect her children, she requested that we change her first name. That’s just one of many signs that antisemitism is on the rise. An alarming sign!