Working Tirelessly to Keep the Memory Alive: An interview with Jörg Kaps 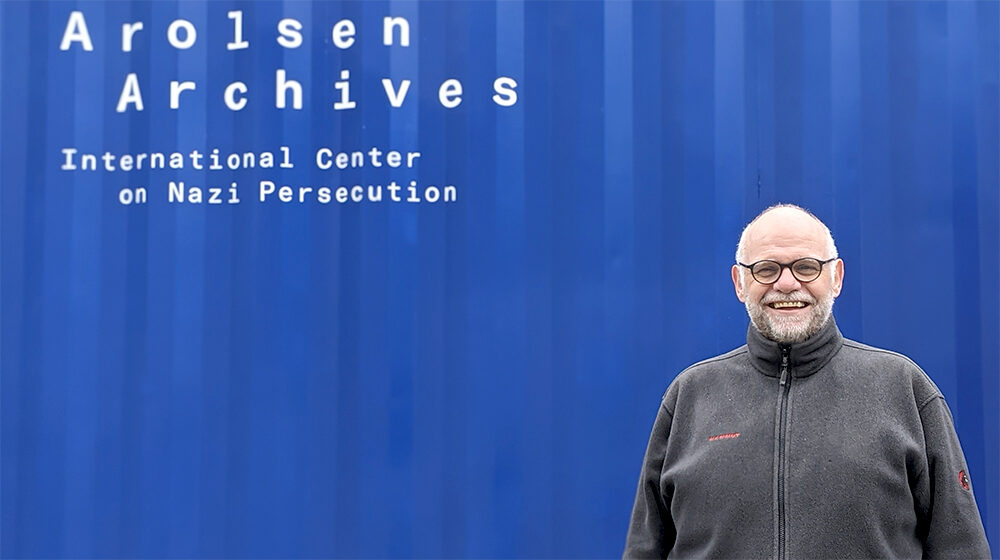 Jörg Kaps is an expert on the Jewish history of the town of Arnstadt – and he played a key role in bringing the Arolsen Archives’ #StolenMemory exhibition to “his” town. It recently opened its doors right in the middle of the market square. In connection with the exhibition’s opening, he spoke to us about the work he does – which doesn’t meet with universal approval in Arnstadt and the surrounding area.

In the winter of 2006, the city council of Arnstadt in Thuringia, Germany, took the decision to have commemorative plaques known as “Stolpersteine” (stumbling blocks) laid for Jewish residents who perished in the Holocaust. They asked youth worker Jörg Kaps to do the necessary research. The detective work began. Kaps filled folder after folder with information, he visited archives, explored family trees, and made contact with relatives of the victims. They live in far flung places, including America, Israel, and even Chile, Argentina, and Uruguay.

Today, more than 160 “Stolperstein” plaques have been laid in Arnstadt. Jörg Kaps received the Obermayer German Jewish History Award in 2015 for his extraordinary dedication to the cause. He was nominated for this honor by 15 Jewish families that used to live in Arnstadt.

He’s also the driving force behind the #StolenMemory traveling exhibition’s stopover in Arnstadt. Inside the container with the fold-out walls, visitors learn more about the last possessions of concentration camp inmates and find out how, with the help of volunteers, it is still possible to return these so-called effects to the families of the victims today.

Mr. Kaps, two events are taking place in Arnstadt today: the #StolenMemory exhibition is being officially opened and the AfD, a right-wing populist political party, is holding its final central rally before the German election. What’s going through your mind?

It’s somehow strangely appropriate that we chose this particular day to open the exhibition. I found out last week that the AfD will be here, but preparations for the #StolenMemory exhibition have been going on for a whole year now. The fact that the mayor was so keen and gave me his support was a great help. It was my idea to put the container right in the middle of the market square. You know, the AfD would get the most votes in Thuringia, even from children and young people under 18 years of age. Of course I wish things different, but as I said at the opening of the exhibition: like father, like son. I think that’s what we’re seeing here.

You say you’re not satisfied with the way history is taught in German schools. What changes would you like to see?

First of all, I’d like to see more time and space given to history lessons in general, and I’d like to see teachers taking their responsibility for educating young people about democratic values more seriously – in the spirit of the Basic Law of the Federal Republic of Germany and the Beutelsbach Consensus, of course. Another thing that’s important to me is that we connect the great history of the world with our own hometown, because I believe that this is where understanding begins – for all of us, not only for young people.

A young girl once said to me that the Holocaust had nothing to do with Arnstadt; Auschwitz, Berlin, Buchenwald – she thought that was as far as it went. But when I pointed out that our grammar school here in Arnstadt alone had seven Jewish students, she said this to me: “Why hasn’t anyone ever told us about it?!” That was the moment when I decided to start organizing “Stolperstein” city tours for the students.

Where do you find the energy for all the work you’re doing on the Jewish history of your hometown?

That’s a good question! I think a lot of it comes from my interactions with the descendants of Arnstadt’s Jewish families. There are 19 families spread across the world, and some of them have become my very close friends. That’s not something I envisaged happening when I first started my research!

About two meters from my grandparents’ grave there was a memorial stone for the Hirschmann family with the inscriptions “Buchenwald” and “Auschwitz.” I’ve been told that when I was a child, I asked my mother what it was. And she explained it to me. Later, as a long-haired teenager growing up in the GDR, I discovered Eugen Kogon’s book “The Theory and Practice of Hell” in a bookstore in Budapest, and one of the details I read in the book struck me like a resounding slap in the face. One day, the bodies of an elderly couple had been placed in straw sacks which were then sewn up and sent to Buchenwald to be burnt. The following words were embroidered on the inside of their clothes: Hirschmann, Arnstadt.

Today, I count the descendants of the Hirschmann family among my friends. Their granddaughter even came to Berlin in 2015 to be there when I was presented with the German Jewish History Award. That gives me the strength to go on.

»I can help reconnect family members and friends who were torn apart by flight and displacement.«

But aren’t there moments when you feel like giving up?

I think anyone who looks into this chapter of our history so closely and dedicates so much time and effort to this kind of work in their hometown soon realizes that what they’re doing won’t meet with universal approval. I’ve been on the verge of giving up my research on a number of occasions, but a descendant of one of the families once said this to me: “Jörg, if you stop, there will be no one to do this work in Arnstadt.” I can help reconnect family members and friends who were torn apart by flight and displacement.

Is there any one moment in all your years of research that particularly stands out in your mind?

Oh, that’s a difficult one. There are so many stories, I can’t really compare them with one other. One example that comes to mind is Leo Ehrlich’s story. He was a Jew from Arnstadt who went to live in Cuxhaven. He had a big contract with the local fishing industry, which didn’t go down well with the Aryan merchants there, of course. He was sent to a Hamburg prison and was deported from there to Sachsenhausen, Dachau, and Buchenwald – information from the Arolsen Archives enabled us to retrace his steps. Like many other Jews who were no longer able to work, he ended up being gassed at the “Heil- und Pflegeanstalt Bernburg,” a “State Sanatorium and Mental Hospital.” He was survived by one daughter named Erika, who lived in Miami.

Shortly before Erika’s birthday, a descendant of another Jewish family from Arnstadt called Alicia happened to call me. She lived in Uruguay, but she mentioned that she was in Miami at the time visiting her son. So I asked her to call Erika’s nursing home and wish her a happy birthday on my behalf. She refused – and went round in to see her in person instead, and she took a cake decorated with candles along with her. That same evening I received a photo of the two of them standing together arm in arm. And Alicia wrote these words to me: “Jörg, I have suffered all my life as a result of the fact that both my grandmothers were murdered in the Holocaust. But today I feel as if I have found a grandmother.”

The #StolenMemory exhibition is in Arnstadt until October 6, the next stops on its route are listed here.