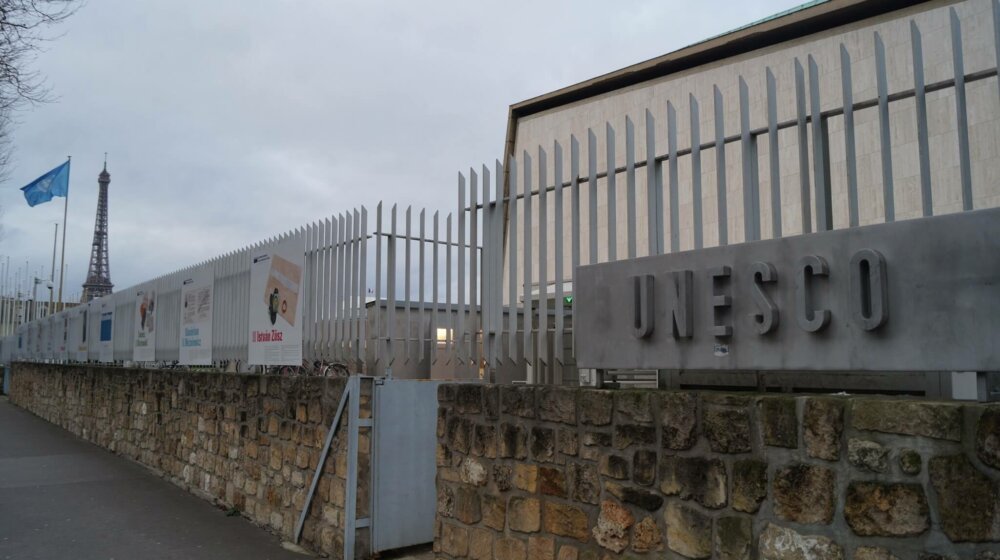 In 2018, the Arolsen Archives were able to return personal possessions belonging to 140 former concentration camp prisoners to the families of their rightful owners. Much of this success is down to the #StolenMemory campaign, which has picked up speed again this year with exhibitions in Paris, Innsbruck and Kassel, and a very positive response from the media and volunteers. 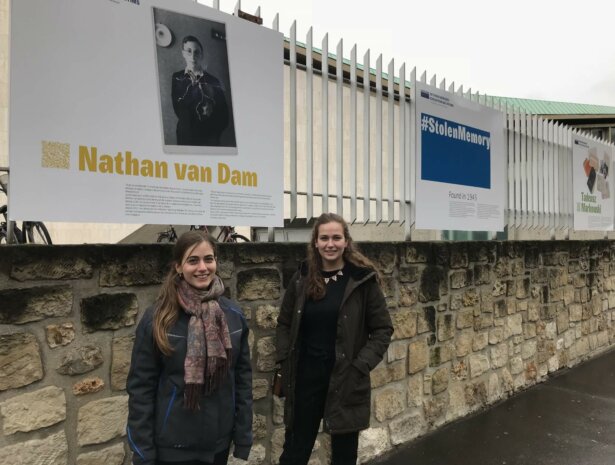 The first exhibition had a very prominent location at the UNESCO building in Paris. Timed to mark Holocaust Memorial Day, the exhibition ran for five weeks and featured photos of objects that the National Socialists stole from their victims when they imprisoned them as well as brief texts telling the stories of the victims. 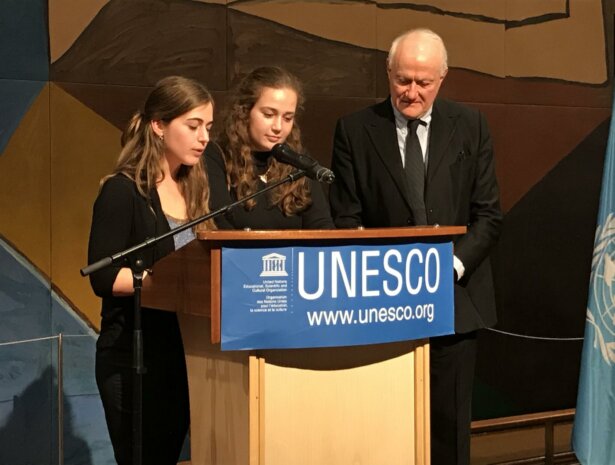 At the official opening of the UNESCO exhibition, Martine and Jeanita van Dam spoke about one of the objects in the exhibition: their grandfather’s wallet, which is marked by a bullet hole. It was taken away from him when he was imprisoned in a concentration camp. For the two sisters, it opened a window onto his life for the very first time.

The use of large-format posters make the campaign even more visible than ever this year. Accompanied by social media posts as well as by traditional media coverage, one of the focuses of the #StolenMemory exhibition is to show what it means to people today when personal effects are given back to them. It also draws attention to pieces whose owners have yet to be found. In order to reach as many people, and as many potential supporters as possible, #StolenMemory is a travelling exhibition. The contents are tailored to suit the location of the exhibition or the thematic focus of the institution concerned. It is a ready-to-print exhibition. 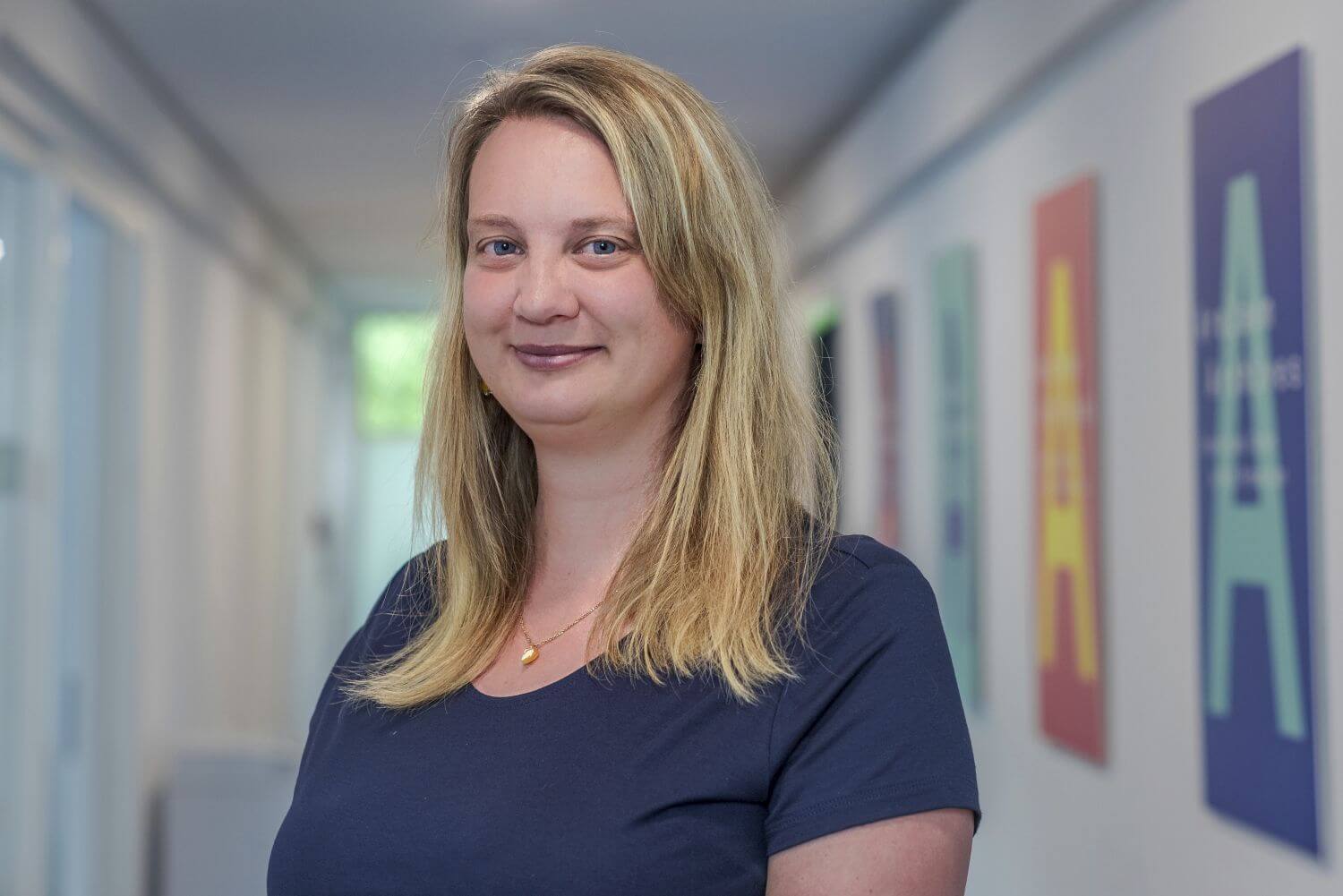 »When we return personal belongings, we almost always find that the families know very little about the fate of their relatives. We are often able to provide them with important information such as where their relatives are buried, for example. So even after all these years, it is still a question of clarifying fates.«

In Austria, too, the campaign and exhibition at the University of Innsbruck gave new impetus to the search for the families of almost 20 concentration camp prisoners from there. In Germany, the exhibition was shown in the Kassel town hall. However, the Arolsen Archives are currently focusing their efforts on the search for relatives in Poland. The campaign met with a particularly positive response there as well as with enormous support from local historians and other volunteers. The upcoming 80th anniversary of the invasion of Poland in 2019 is another reason for the current focus on the country, as well as the fact that there were victims of the German Nazi regime in at least every second family.

Wanda Jaroszyńska remembers her mother, Wiesława Brzyś, as an elegant woman who liked to dress smartly. The National Socialists arrested her during the Warsaw Uprising in 1944. They confiscated the jewelry she is thought to have been wearing when she was arrested. In 2018, the Arolsen Archives returned the pieces to her daughter; they include a gold wristwatch, an amber brooch, and a pendant depicting the Virgin Mary – testimonies to the suffering her mother endured in various concentration camps and which she hardly ever spoke of.

»Thanks to the campaign, and the fact that we have actually been able to return some personal possessions, our network is growing all the time. More and more memorial sites are asking us to loan them objects for exhibitions, for example«, says Anna Meier-Osiński. The media and circles of supporters took up the campaign with increasing intensity in 2018 and helped us with research. In Poland, for example, TV appearances paved the way for further research, which culminated in a number of possessions being returned to their rightful owners. And in Spain, reports on the Arolsen Archives and on this project appeared in almost all of the country’s leading newspapers. Radio stations, print media and blogs joined in the search for the families of the original owners of objects confiscated from Spanish victims of Nazi persecution. With the support of a growing number of committed helpers, we succeeded in locating four families right away. The daughter of a former forced laborer travelled to Bad Arolsen with eleven relatives to receive her mother’s jewelry, for example. »We mustn’t forget that this is a sensitive issue which is still very close to the hearts of the families concerned«, explains Anna Meier-Osiński. »Most of the people to whom we return personal belongings are close relatives, often children or grandchildren, for example. The objects often bring back personal memories«.