Anna´s search for the truth

Anna Salton Eisen’s introduction to the Holocaust began when she was a young child and found a watercolor painting hidden in a drawer. This powerful and disturbing image was signed by L. Salzman, a name she was unfamiliar with. Anna knew instinctively that she had stumbled across a scene that she was not supposed to find, and so she put the painting back and never spoke of it.

It was only later that she learned L. Salzman was in fact the original name of her father, George Salton, who created this painting in 1946 at the age of 18 while living in a displaced persons camp. The discovery of this picture was the first step in a journey by Anna to uncover the truth of her father’s Holocaust past.

A photo of the grandparents

Anna also found this portrait of her grandparents that been buried in a bedroom drawer along with the story of her family history. As she grew up, Anna’s parents, who were both Holocaust survivors, never shared the names of the many relatives who had perished in the Holocaust. Anna’s father rarely spoke about his years in the concentration camps in an effort to protect Anna and her two older brothers from the horror of what he had endured. It wasn’t until Anna was an adult herself that she pleaded with her father to reveal his true history.

I rarely spoke of the Holocaust or my life before the war. But children are curious, and they began to ask questions and demand answers. They claimed my past as part of their own and wanted to know about the grandparents and uncle whom they had never met.

George Salton was born Lucjan Salzman in Przemyśl, Poland and was living with his father Henry, a lawyer, and his mother, Anna. His older brother Manek was about to start college in September 1939 when the Germans invaded Poland. Lucjan was about to enter the sixth grade. After two difficult years living under Nazi occupation, the Jews of Tyczyn were sent to live in the Rzeszów ghetto. Conditions were terrible, hunger and disease rampant, as well as the ongoing brutality, violence and murder at the hands of the Nazis.

In 1942, a small group of around 450 young Jewish men were separated from the nearly 23,000 Jews in the ghetto as part of a forced labor group for Daimler-Benz that had taken over a factory in Rzeszów to manufacture small airplane engines. In the summer of 1942, the rest of the Jews in the ghetto were forced into boxcars and sent to be murdered in the Belzec extermination camp. Lucjan worked in the factory that was renamed Reichshof by the Germans, until Daimler Benz evacuated the factory in July of 1944 as the Soviets drove into Poland.

The factory would be dismantled and moved to France. The Jewish labor prisoners were transported first to the Płaszów concentration camp, then to Wieliczka and Flossenbürg before they arrived to the tunnel factory in Urbès, near Colmar, in August 1944. As the Americans swept across France, the factory was bombed and the SS moved the remaining prisoners back to Germany and through the camps of Sachsenhausen, Watenstedt, Braunschweig, Ravensbrück, and Wöbbelin, where they were liberated by American soldiers on May 2, 1945.

Some of the stronger prisoners helped or carried the weak and sick so that they too would see that this day had come...We embraced and cried together. We told each other that we had survived and that we should never have given up hope. This was our day of glory. I stood together with Julek Schipper, Motek Hoffstetter, Moishe Ziment, Mola Tuchman, and Moses Verstanding. 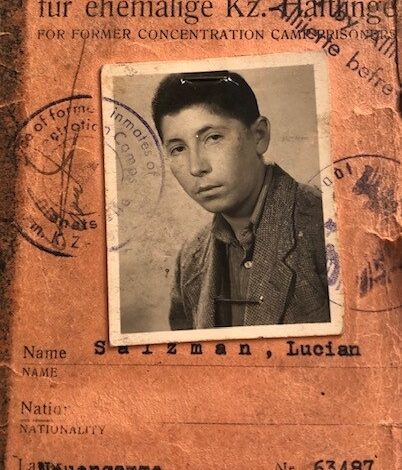 Lucjan would spend the next two years in the Neustadt displaced persons camp in Lübeck, Germany, until he located a relative in the United States who sponsored him, and he traveled on the USS Marine Flasher to Ellis Island to continue his life in America as George Salton.

Although he had only completed the fifth grade, George was drafted and served in the U.S. Army and used the G.I. Bill to earn college and graduate school degrees and had a long and successful career at the Pentagon and in the American Defense Industry. He was married for 63 years to another survivor named Ruth, and he passed away in 2016 while living in Florida. He had 3 children and 6 grandchildren.

The picture shows the Displaced Persons camp ID card of Lucjan Salzman. (Photo: From the collection of Anna Salton Eisen)

Inquiry at the Arolsen Archives

A file with 69 documents

Anna contacted the Arolsen Archives and did a search on her father, Lucjan Salzman. She received a file with 69 documents. Included were a post-war ID card that listed all 10 camps and his prisoner numbers, handwritten entry lists at several of the camps, and other postwar lists. These became precious artifacts which detailed the history of her father, his family, his town, the ghetto and concentration camps he had suffered through. 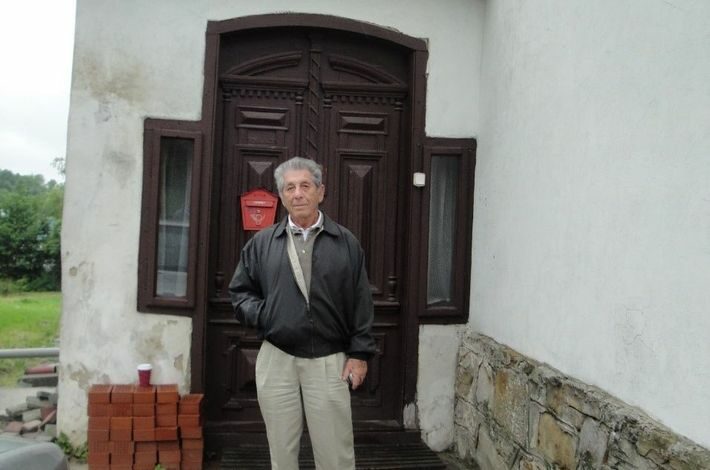 Journey to the past

In 1998, Anna traveled with her parents and two older brothers to Poland, where they learned about the German invasion and occupation, visited the sites of concentration camps and ghettos, and traveled to her father’s hometown and even went into his boyhood home in Tyczyn.

When they returned to the United States, Anna helped her father write and publish The 23rd Psalm: A Holocaust Memoir, which chronicled his Holocaust survival, including relocation to the Rzeszów ghetto, imprisonment in ten concentration camps over three years, and liberation by American forces.

George Salton in front of Tyczyn childhood home on a trip to Poland in 1998. Photograph from Anna Salton Eisen’s collection.

Friends from the DP camp

Anna came upon photographs of George’s friends from the displaced persons camp that he had held onto for more than 75 years. She recognized some of the names on the back of the photos as the same people he had written about in The 23rd Psalm.

In his memoir, George writes about a small group of his friends more than 100 times, referring to a few other young men who had shared his same fate and been with him from the ghetto, through the ten camps, until liberation, and after the war.

During their trip to Poland, George had shown Anna where some of these fellow prisoners had lived before the Holocaust, and he had spoken about them over the course of his lifetime with great admiration and gratitude, for they had all helped to keep each other alive.

Looking at the faces in the photographs and knowing from the memoir that some of them had been with her father through the Holocaust, Anna felt compelled to search for this special group of survivors and their families.

Moses Tuchman was mentioned in her father’s memoir. Anna searched the Arolsen Archives and found his name and date of birth on multiple camp lists, as well as his Flossenbürg document and a post-war card, which confirmed that this was the same person who was from her father’s hometown and had been his friend and fellow prisoner during the Holocaust. With the information from his post-war record, including the name of his uncle in New York, Anna was able to find the living relatives of Moses Tuchman and ultimately connect with his two daughters.

Tobias Nussen’s photograph was in the displaced persons collection George had, but his name was not in the memoir. Using the Arolsen Archives, Anna found Nussen’s entry on several of the same camp lists and documents as her father and the other prisoners. In spite of variations of his birthdate on multiple records, Anna was able to match Nussen’s signature on the back of his photograph to that on his Flossenbürg card, thus confirming that this friend from the displaced persons camp had also survived the Holocaust at George’s side, as part of the labor group. This information proved vital in locating several of his living family members.

Another photograph in the displaced persons collection belonged to Izok Rypp. He is mentioned in The 23rd Psalm: A Holocaust Memoir as one of the “good young men” George had been with in the concentration camps. In the Arolsen Archives, Anna found his name on multiple camp lists, usually just a few lines above her father’s name because of their proximity in the alphabet. The post-war registration card showed that he was the same age as Anna’s father, one of the youngest in the labor group. Anna was heartbroken to find that the Arolsen Archives also contained his death certificate. Izok Rypp died in a hospital in Hamburg, Germany on July 23, 1947, just a few months short of his twentieth birthday. Anna still searched but was unable to find any living relatives, and so the memory and history of this young Jewish prisoner is only preserved through the Arolsen Archives and the memoir of George Salton.

The Arolsen Archives preserve numerous documents about the fate of the fellow prisoners of George Salton.

These were friends who would help me at every chance, whom I could trust to watch my shoes or bowl, and who would even lie to a Kapo or the SS to save my life.

On the morning of Sept. 26, 2021, family members of 8 Holocaust survivors, who survived the Rzeszów Ghetto and 10 concentration camps together, met for the first time in an emotional gathering at a hotel in New Jersey to share their fathers’ stories and talk about their own experiences as the children and grandchildren of survivors. Some traveled there in person from across the United States, and 3 families connected via Zoom from Texas, Israel, and Sweden.

Anna Salton Eisen had combed through the Nazi era data stored online at the Arolsen Archives in Germany for documents, concentration camp lists, and post-war records to verify the survivors’ names and dates of birth. Using Ancestry.com, she found passenger lists of ships taking Holocaust survivors to other countries, Social Security cards documenting name changes, and obituaries and family trees to identify their living family members.

Via Google and Facebook, she set out to connect with the children of these fellow survivors, who all were surprised to hear from her and shared one thing in common: Each knew nothing about their Holocaust background until they read and found their fathers’ names and stories in The 23rd Psalm.

In his book "The 23rd Psalm: A Holocaust Memoir," George Salton wrote about his experiences during the Holocaust. 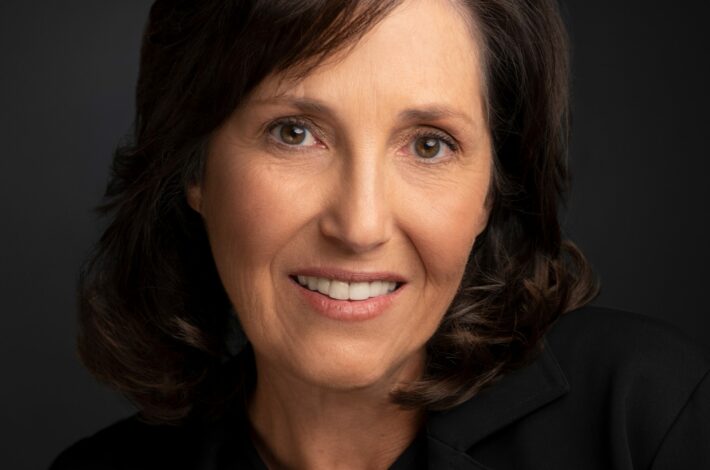 Anna Salton Eisen is the author of Pillar of Salt: A Daughter’s Life in the Shadow of the Holocaust (April 2022, Mandel Vilar Press) and also the subject of the documentary film, In My Father’s Words (April 2022, Jacob Wise Productions).

On December 9, 2021, she was our guest at the online live event: Second Generation Talk with Anna Salton Eisen.