In the summer of 2019, the participants in an archeology workshop made a spectacular find: on the site of a former munitions factory near Berlin, they unearthed more than 1,000 old metal plate data carriers from the Nazi era.

Many of these so-called Adrema stencils hold information about people from all over Europe who were compelled into forced labor at factories – their names, dates of birth or places of birth. These plates therefore constitute unique, long-lasting evidence of their ordeal.

The Arolsen Archives are now adding the finds to their collection, analyzing the data and supplementing it with information from the world’s largest archive on Nazi victims. This allows us to undertake a comprehensive reconstruction of many of these people’s fates and make them available online. 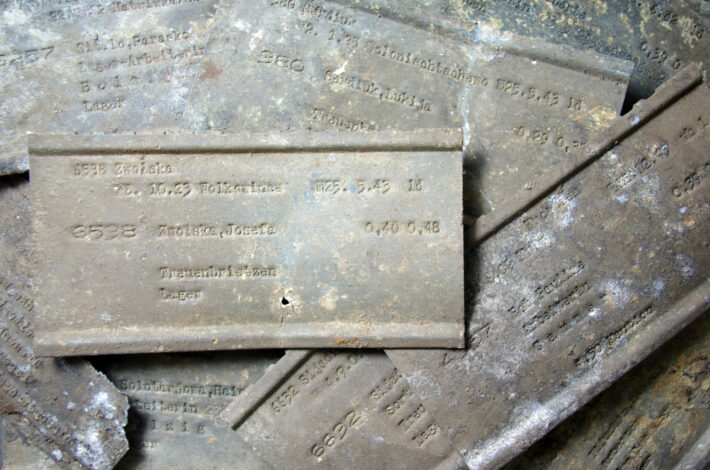 The “ADREMA” system (short for addressing machine) was used by companies and administrative authorities well into the 1950s to manage larger amounts of data – primarily about employees – and to create bulk letters. It consisted of a stamping machine and a printing machine for metal stencils on which the personal data was stamped. During the Nazi era, factories also produced data carriers of this kind for their forced laborers.

ADREMA’s inventor and owner Julius Goldschmidt, who was Jewish, was forced to sell the company and flee Germany in 1935, whereupon ADREMA was subsequently “Aryanized”.

On the trail of the forced laborers

At the international summer camp “Exclusion. Archeology of the Nazi Internment Camps”, young people from all over Europe came together at the invitation of the Nazi Forced Labor Documentation Center to get a practical understanding of Nazi history through archeological digs.

With metal detectors, excavation tools and their own film crew, the 15 youngsters from nine countries set off at the end of August 2019 for the Treuenbrietzen forest in Brandenburg. On the site of the former Sebaldushof munitions factory and associated forced labor camp, they looked for remains from the Nazi era and items used by victims and perpetrators. They were assisted by a number of pupils from Treuenbrietzen comprehensive school, with the group receiving guidance from staff from the Brandenburg State Office for the Preservation of Monuments.

Over two days of the project, the participants unearthed more than 200 finds, such as pots, cutlery and jewelry – and the approximately 1,000 ADREMA stencil plates which record data including data on numerous forced laborers from all over Europe. They then cleaned up and documented their finds. This included the creation of a database of the information about forced laborers on the stencils, such as names, dates of birth and background.
With their work and their finds, these young people have made an important contribution to the exhibition “Exclusion. Archeology of the Nazi Internment Camps” at the Nazi Forced Labor Documentation Center. You can take a 360° tour of the exhibition here:
https://www.ns-zwangsarbeit.de/ausgeschlossen/

Under the guidance of two professional filmmakers, the participants in the summer camp documented their archeological work and their examination of the history of forced labor in a film.

The Adrema plates are unique sources that can help us identify and rehabilitate victims of Nazi tyranny. With the support of the Arolsen Archives, we would like to give as many hitherto nameless forced laborers as possible their identity back, and perhaps even find their families

Who were the forced laborers at Sebaldushof?

During the Nazi period, ADREMA plates were probably used in most German factories associated with forced labor camps. They therefore constitute lasting, tangible evidence of Nazi tyranny, evidence still waiting to be discovered in thousands of places across the territory of the former German Reich.

Further excavations planned
Coming in at 1,000 plates, the find in the Treuenbrietzen forest is one of the biggest successes in archeological excavation in Germany. Stamped consecutive numbers on the plates found to date go up to just under 10,000. This means that at least this number of plates were produced for the workers – and many of them are doubtless still preserved at the site. “We are planning further digs in the forest in the next few years, in the area of the camp administration,” explains Thomas Kersting, who as an archeologist at the Brandenburg State Office for the Preservation of Monuments provides technical support with the excavations. 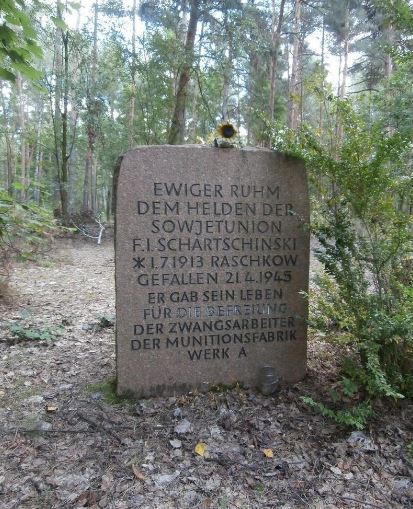 At Sebaldushof, which was built as a paper mill in 1805, covert production of munitions began as early as the 1920s. In the 1930s, a modern munitions factory was built there, where numerous forced laborers and military internees were compelled to work from 1942 until the end of the war. They were housed in a neighboring camp that was part of the Sachsenhausen concentration camp.

Forced laborers came from all over Europe
The ADREMA plates were created for all workers, including the German citizens who were employed at the factory. About half of the address plates found on the site to date pertain to forced laborers from abroad. Their home countries can often be identified from the places of origin or birth mentioned: Russia, Belarus, Ukraine, Poland, Bosnia, Croatia, Serbia, Hungary, Romania, Czech Republic, Lithuania, Latvia, France, Italy, Holland, Belgium, and even Portugal. Laborers from Austria and the Sudetenland, who lived in rented accommodation in Treuenbrietzen and surrounding villages, are also recorded here, which means that they can be traced using this archeological source material.

A great deal of information on each plate
On the plates, there is a consecutive number to the left of the first and last names that provides an indication of the total number of these metal plate data carriers that may have been produced. For forced laborers from abroad, this is followed by the place where they were housed (e.g. Treuenbrietzen Sebaldushof, Treuenbrietzen camp). There is also often a job description, such as wheelwright, precision mechanic, machine worker, kitchen help. In one or two lines at the top left, the number and surname are again recorded, then the date and place of birth, and sometimes also the home country. Then there is the date of “start of work”, where the E. presumably means Einsatz (employment), and the marital status, such as ld: ledig (single), vh/2: verheiratet, zwei Kinder (married, two children). On the right margin, there are what appear to be agreed wage details (possibly the hourly rate) in Reichsmarks. At the very bottom left, place names are sometimes recorded that are neither place of birth nor residence – possibly other or previous places of employment. 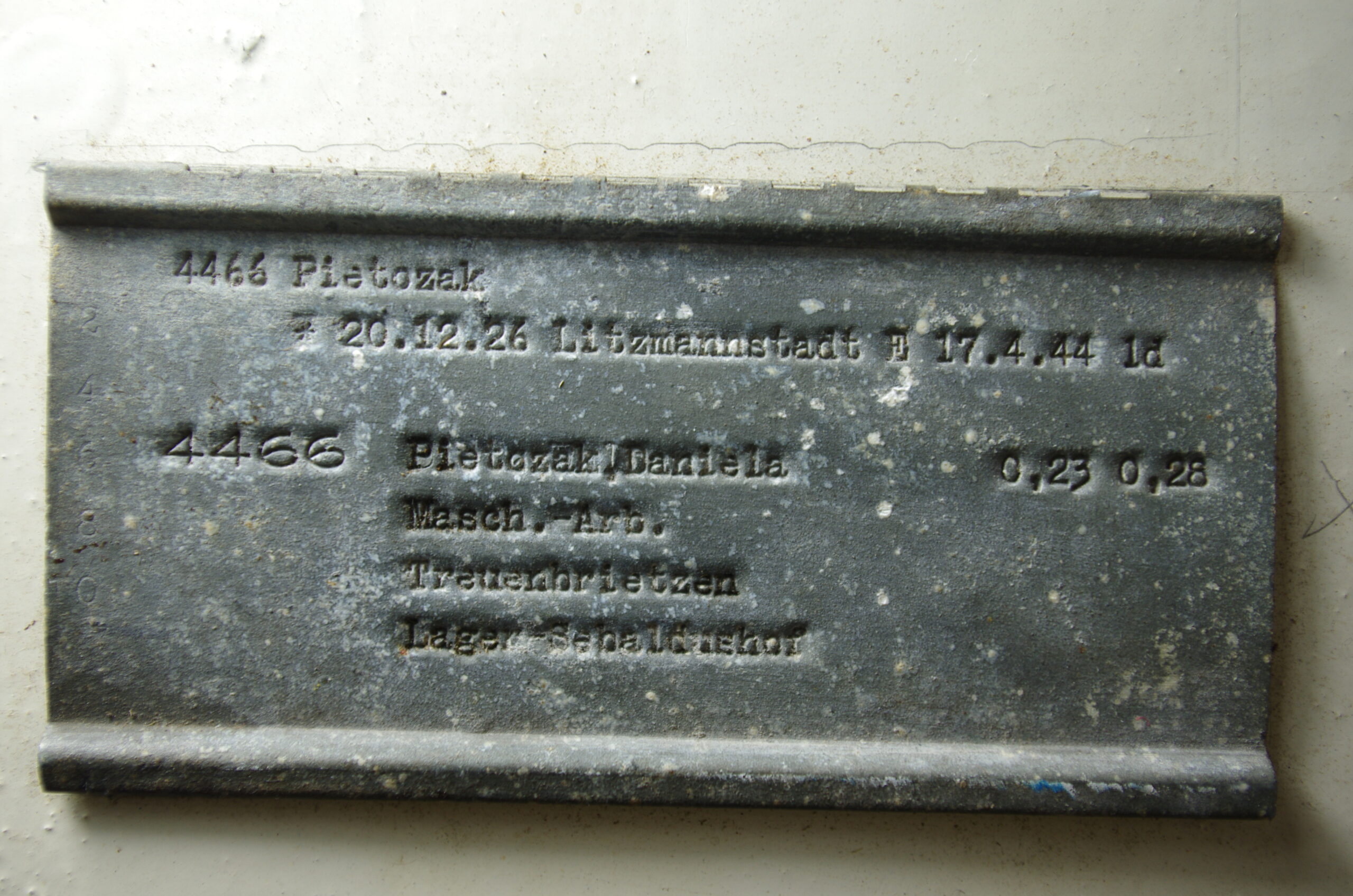 With the digital database, in which all information on the ADREMA plates found to date has been entered, it is now possible to draw some interesting conclusions about the group of workers at Sebaldushof. An analysis by “start of employment” shows that the first recruitments were made as early as the 1920s, and that from 1933 onwards, a few employees were added each year. 1938 to 1941 saw an upsurge, with over 40 people annually. These people were of non-German origin only in exceptional cases. From 1942 on, the big wave of deported forced laborers began: in 1943, 229 new workers were recorded, mostly people from Russia, Poland and other occupied eastern territories.

The documents held by the Arolsen Archives concerning the forced laborers at Sebaldushof complement the data found on their individual ADREMA plates. In the case of young Konstantin from Mariupol in Ukraine, this makes it possible to reconstruct the fate of a typical forced laborer.

According to his registration card for “civilian workers from Soviet Russia”, which is on file at the Arolsen Archives, Konstantin Grigorasch – born: May 6, 1924 in Ursun, Russia, marital status: single, religion: Orthodox, occupation: agricultural worker, place of origin: Mariupol, Ukraine – performed forced labor at the Treuenbrietzen metal works from May 10, 1943 to July 1, 1943. During this time, he was housed in the Sebaldushof community camp. 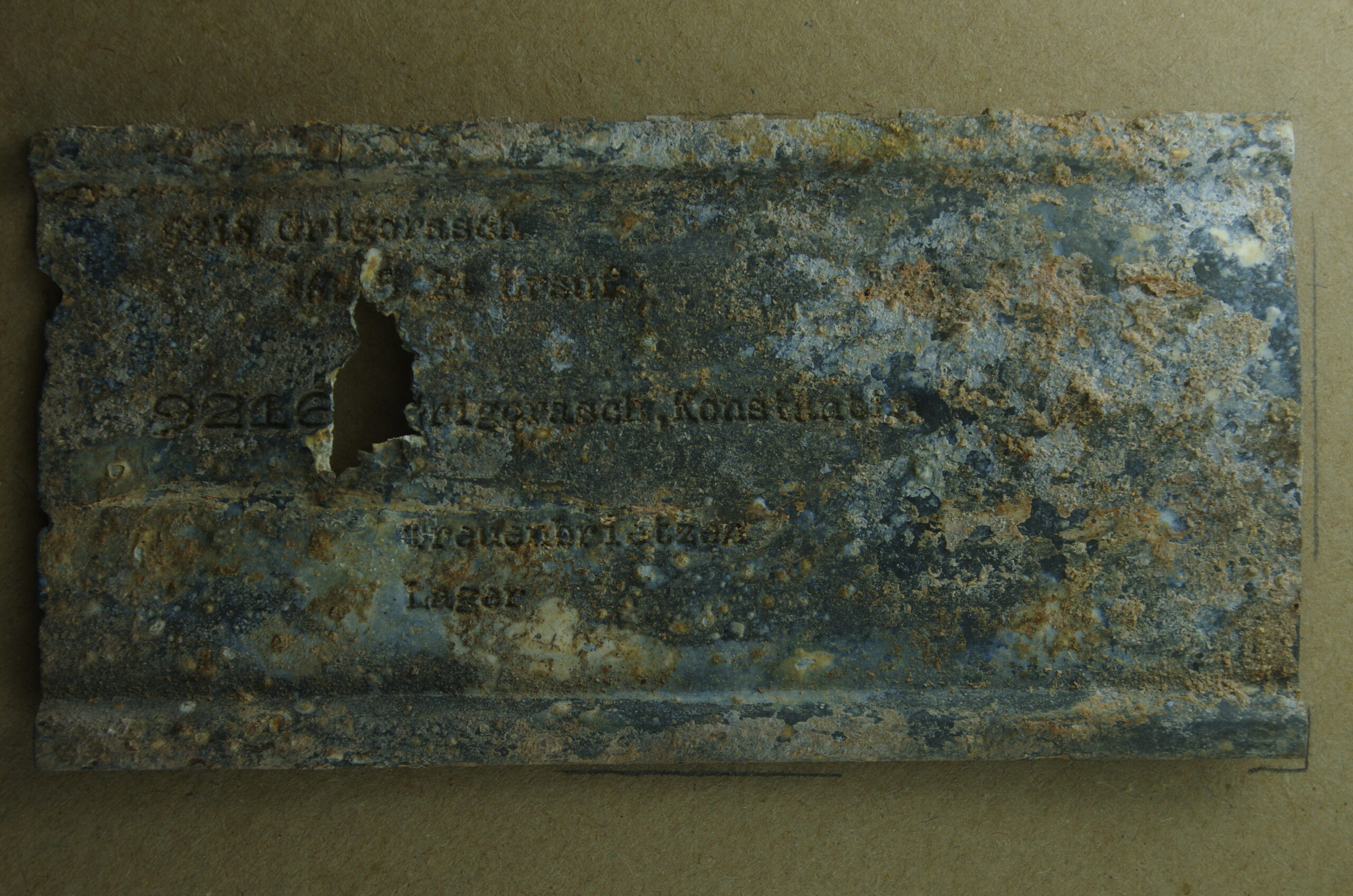 Particularly for Adrema plates that are not very well preserved, as is the case with Konstantin’s, the information held by the Arolsen Archives can supplement the biographies of forced laborers.

The next phase of Konstantin’s forced labor followed on July 5, 1943, for the Radbod colliery in the town of Bockum-Hövel. A second registration card from Eschweiler Bergwerksverein AG, Erin colliery, Castrop-Rauxel, contains information about his transport from Sebaldushof to Bockum-Hövel. 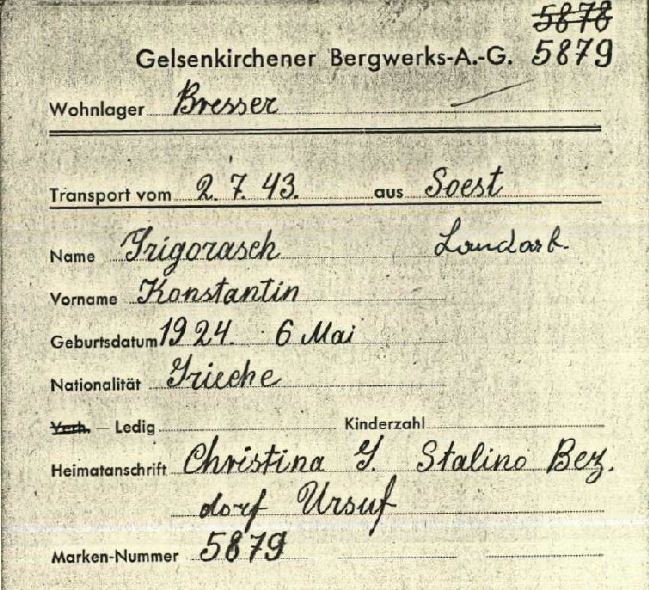 Konstantin appears to have been first taken from Treuenbrietzen to Soest in Westphalia. From there, he arrives with a transport on July 2, 1943 at the Bresser residential camp run by Gelsenkirchener Bergwerks AG, where he is temporarily housed. According to an excerpt from the Radbod colliery’s book of arrivals, Konstantin starts his first shift on July 7, 1943.  An excerpt from the colliery’s book of departures shows that he had his last work shift on March 29, 1945. On April 20,1945 he was deregistered by the responsible employment office.

After the war, the municipality of Bockum-Hövel compiled a list of erstwhile forced laborers, which includes Konstantin. He survived his forced labor and appears to have remained in Germany in the early post-war period, as his name appears in a post-war compilation from the British zone.

The Arolsen Archives has no information about Konstantin’s life thereafter. We also received no inquiry from him in the context of late compensation for forced laborers.

I did not know until now that I was not allowed to leave the county area without police permission.

Maurice Wurtz, forced laborer from France (in 1943 during a police interrogation)

Because he was a French citizen, Maurice Wurtz was actually one of the more privileged forced laborers at Sebaldushof. Documents held by the Arolsen Archives show that on one occasion in August 1943, he was even allowed to leave for a holiday at home – a holiday from which, according to a letter from the munitions factory to the Treuenbrietzen district court, he did not return on time. At that time, he had been employed at the factory for three months, as shown by the “date of joining” on his Adrema plate: 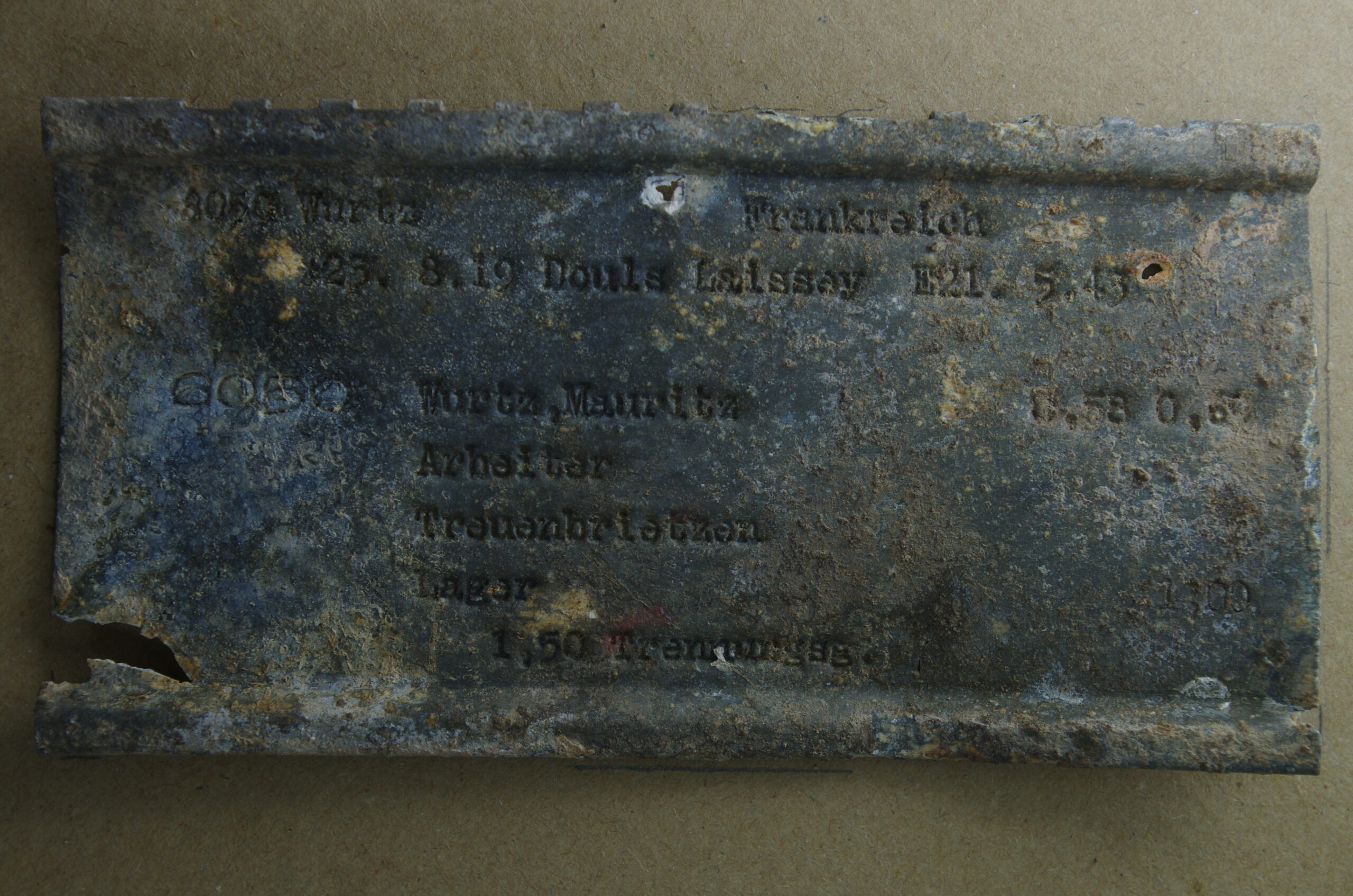 However, just how tight the constraints on behavior were, even for somewhat better-off forced laborers like Maurice, is shown by a rare document about him held by the Arolsen Archives. Typically, our archive keeps records of forced laborers in registration card format and lists of companies, municipalities or hospitals. For Maurice, however, there is also a criminal record from the Brandenburg/Havel public prosecutor’s office. He had left Treuenbrietzen without permission on July 3, 1943, and had gone to Brandenburg. He wanted to get his laundry in the “French camp” at the Brennabor works there, where he had previously worked, and then spend the night and his Sunday off. For this he was the subject of a criminal charge for “leaving the place of residence without local police permission”. The penalty: an unaffordable fine of 60 Reichsmarks, plus administrative costs of 3 Reichsmarks – or 20 days in prison.

There are probably still thousands of company archives or estates in which old Adrema plates for forced laborers are kept – or other excavation sites around factories and forced labor camps.

We want to add more of these old data carriers to our archive and make the information on them available online with the help of digitization initiatives like everynamecounts. This is our way of honoring the fates of forced laborers and ensuring that their stories are not forgotten.