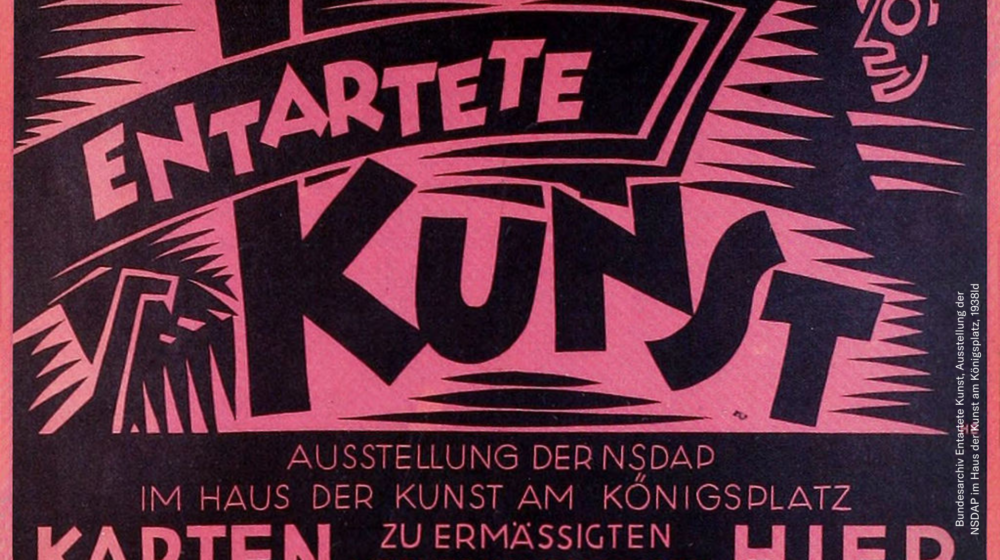 “Degenerate art” – many people are familiar with the term. But what were the National Socialists trying to achieve by denigrating certain types of art, and what consequences did the Nazis’ cultural propaganda have for artists?

Once German political institutions had been aligned with Nazi goals, a process referred to as Gleichschaltung (English: coordination), the Nazification of German culture was the next stage in the National Socialists’ plan to spread their ideology. To this end, they passed the Reich Chamber of Culture Law on September 22, 1933. Joseph Goebbels had taken over the newly founded Ministry for Propaganda and Public Enlightenment in March 1933 and was now president of the Reich Chamber of Culture too. In order to continue working in the cultural sector, people had to belong to a chamber – but membership was only open to those who were able to present a so-called Aryan certificate, a document which provided proof of “Aryan descent.” A person was considered “non-Aryan” even if they had only one Jewish parent or grandparent.

Artists who were not able to produce an “Aryan certificate” no longer had official permission to practice their profession. This occupational ban was also extended to artists whose work did not conform to Nazi ideology.

From July 19 to November 17, 1937, a traveling exhibition titled “Degenerate Art” opened its doors in Munich to display hundreds of works of art that had been confiscated from German museums. The exhibition went on to tour other major cities of the German Reich. Over three million people visited the exhibition – a significant number of them were taking advantage of the last opportunity to see works by artists such as Ernst Ludwig Kirchner, Paul Klee, Oskar Kokoschka, and Käthe Kollwitz.  During the purge of German art collections, the Nazis sold some important works abroad, but they also destroyed a great many pieces.

Parallel to the “Degenerate Art” exhibition in Munich, Adolf Hitler opened a counter-exhibition intended to showcase ideal new German art. From that point on, abstract art no longer had any place in German museums or art collections. The new focus was to be on realistic representations and the glorification of a heroic “Aryan race.” Art served as propaganda and was not supposed to express any criticism of social ills. Topics such as social misery, any kind of deviation from the norm, or the horrors of the First World War were taboo.

The National Socialists exhibited the “degenerate” works of art alongside photographs of people with physical disabilities. According to the Nazi narrative, it was obvious that the “degenerate art” had been created by “inferior and sick-minded people.” This led them to the conclusion that only healthy minds should create new art for the new Germany. On the one hand, this enabled them to vilify the artists, while on the other hand, it legitimized the persecution of people the Nazis deemed inferior.