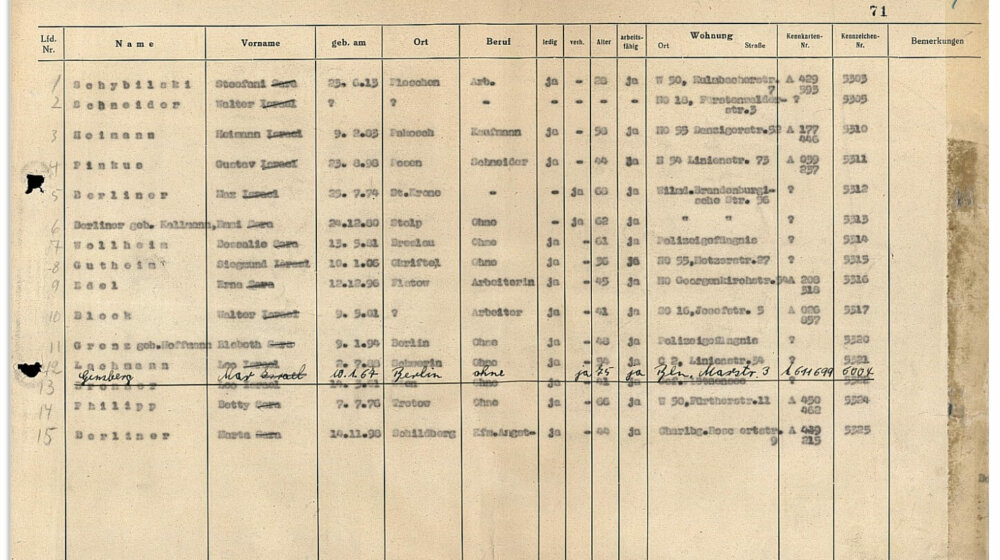 The Arolsen Archives are hosting an international conference at the start of November on the current state of sources and research relating to deportations in the Nazi era. The conference is aimed at a specialist audience of researchers and members of civil society and will focus on various sources, their knowledge potential and methods of indexing. It will also address new systematizing and comparative research questions and approaches.

“Deportations were a major component of the Nazis’ extermination policy,” says Giora Zwilling, Head of Archival Description at the Arolsen Archives. “This is why it is important for us to link and comprehensively index the document collections that shed a light on deportations.” The Arolsen Archives seek out partnerships and alliances that generate synergies here. “We collect originals as well as copies in Bad Arolsen,” Zwilling explains. The goal is to establish a network that improves opportunities for researching the fates of individuals and increases the knowledge gained by researchers.

The team led by Giora Zwilling has already made important strides. For example, transport lists from Leipzig that had been preserved for decades by the city’s Jewish community were recently digitized and indexed. These lists were originally created by the Reich Association of Jews for Central Germany. “The information roughly covers the region from Kassel to Dresden,” Zwilling says. Jewish communities in Germany were forced by the Nazis to draw up lists themselves. In addition to transport lists, there were so-called “home purchase agreements” that were used to rob the victims of their property. The documents from Leipzig were not archivally described during the GDR period. They have now been fully digitized and indexed by the Arolsen Archives. The originals will remain in Leipzig.

A new partnership has also been established with the Documentation Center of Austrian Resistance. “Vienna had one of the largest Jewish communities in the German Reich,” says Giora Zwilling. “Through our cooperation with the Documentation Center, we received photos and metadata for deportation lists in October and integrated them into our archive.” These replaced old, almost illegible copies of documents that were almost impossible to search. The same applies to the nearly complete deportation lists of the Gestapo from Berlin, which were recently re-digitized by the Arolsen Archives. “We already had these lists in our collection, but they were very poor black-and-white copies from the 1950s that were not really searchable,” Zwilling explains. State-of-the-art technology has been used to “deeply index” the data, which can now be searched by name, profession, birth date, birth name and even street and house number.

Numerous researchers and archive employees will come together at the multi-disciplinary professional conference at the start of November. “We want all of them to be able to conduct research more easily, and we want to work together to preserve and expand our collective memory,” Giora Zwilling says. “We very much look forward to the discussion during the online-conference.”

Info: Online Conference on Deportations in the Nazi Era

On November 2-4 2020, the Arolsen Archives are hosting the online conference “Deportations in the Nazi Era – Sources and Research”. The conference deals with deportations as a central structural element of national socialist persecution and extermination policy. Experts report on their research in numerous panels and discussion formats.