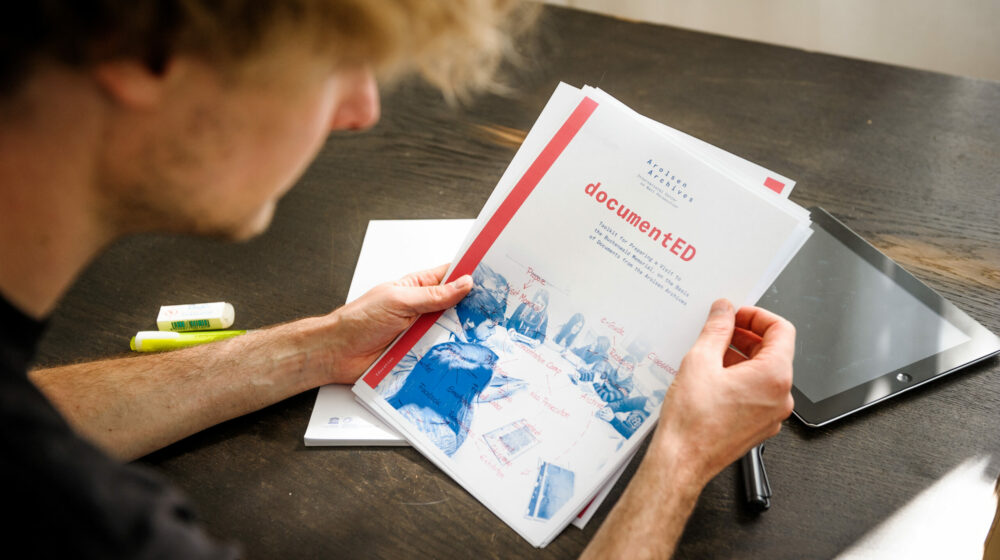 How can we ensure that young people learn lasting lessons from visits to memorial sites? The Arolsen Archives are now launching the documentED project: with targeted study packs and ideas for projects that enable students to delve deeper into the subject during lessons.

Young people often know little about the persecution of people during the Nazi era – despite the topic being firmly anchored in school curricula. Given the hatred spread by the far right on the internet, it is increasingly important that schoolchildren are well informed so they do not get caught up in the dangerous vortex of racism and antisemitism. This is why the Arolsen Archives are now supporting schools with materials for trips to memorial sites, with a focus on the fate of individual concentration camp prisoners. The documentED project uses individual fates to lead on to an understanding of the broader context. Why did the Nazis imprison people? And what function did the concentration camps have?

documentED enables young people to learn how to read and understand perpetrator documents about the victims. There are material packs, known as toolkits, on over 40 prisoners. These can be downloaded from the internet. They represent 13 different memorial sites and a wide range of reasons for persecution.

Josef Schuster, President of the Central Council of Jews in Germany, welcomes the initiative by the Arolsen Archives: “When schoolchildren study documents from the Nazi era and learn about the personal fates of concentration camp inmates, the horror of the Holocaust becomes more comprehensible. documentED helps immunize young people against antisemitism, racism, and hatred.”

Students plan their own commemorative projects

Each toolkit gives teachers didactic advice and supplementary materials, including analog and digital ideas for subsequent commemorative projects. The young people can then implement these ideas independently and creatively. The toolkits can be used within individual lessons as well as for multiple hours of preparation and follow-up work for trips to memorial sites.

The Arolsen Archives can provide schools with customized toolkits that have a two-fold local connection on request: In this case, the documents in the toolkits do not only relate to the memorial sites that are to be visited, but also to the place the young people come from. Learning about the personal fates of detainees from their own school’s local area gives young people a special connection to the topic.