#StolenMemory at the Auschwitz-Birkenau State Museum 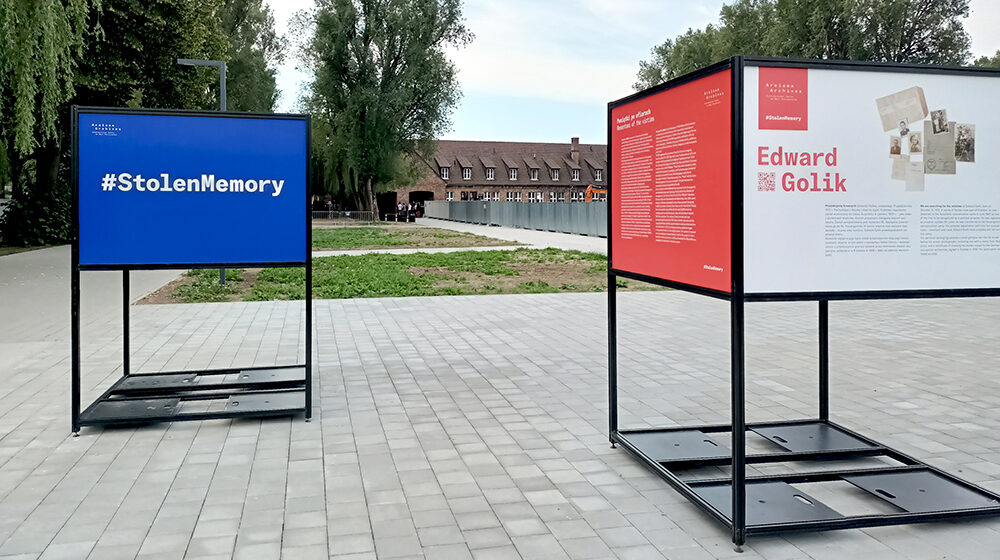 On June 13, the #StolenMemory exhibition opened at the main entrance to the Auschwitz-Birkenau State Museum. Prepared by the Arolsen Archives to mark the 82nd anniversary of the first transport of Polish political prisoners to the Auschwitz concentration camp, the exhibition highlights the fate of those whose last belongings had been taken from them upon arrival at the camp. The aim of the campaign is to find the families of the victims and give them back the last keepsakes of their loved ones.

In 1963, the Allies handed over a very special collection to the International Tracing Service (now Arolsen Archives). It contained personal belongings taken from people who had been sent to German Nazi concentration camps. These included everyday items such as combs, razors, jewelry, watches, rosaries, photographs, and letters to loved ones.

During the first years of searching, many of these items were successfully returned to their rightful owners. Since 2016, when the Arolsen Archives launched the #StolenMemory campaign, more than 600 families around the world have been found.

The first transport to Auschwitz

On June 14, 1940, the Nazis deported 728 political prisoners from Tarnów to the Auschwitz concentration camp in the first transport.

“When we see the piles of suitcases, glasses, and shoes left behind by those exterminated here at Auschwitz, we think of the people who experienced a horrible death. But we don’t just look at the things, we also see the stories of the victims who were stripped of their dignity and identity,” said Floriane Azoulay, director of the Arolsen Archives, at the opening.

“Thanks to bridge building between institutions, so many of these fates have been retraced. How important these objects are, each of us perhaps experiences, when these loved ones passed away”, remarked Andrzej Kacorzyk, deputy director of the Auschwitz-Birkenau State Museum.

Although the photos show the personal items, the #StolenMemory exhibition is not about the objects but about the tragic fates of their owners. The objects left behind by these people became a tool for reconstructing the stories and to trying to find the relatives.

During the opening, the director of the Arolsen Archives also spoke about the Russian attack on Ukraine and the crimes against humanity that are currently taking place there. “For weeks now, horrific crimes against humanity have been committed beyond Poland’s eastern border. Once again, many family stories will be or have already been destroyed, and children and grandchildren will grow up traumatized,” said Floriane Azoulay.

“It seemed that a war of aggression on European territory would not happen again, but when Russia attacked Ukraine, it became clear that nothing is certain and no one can feel safe. Peace cannot be taken for granted,” she added.

Among the people taken to the Auschwitz concentration camp in the first transport was Ludwik Grąz, who had his school identity card and photograph with him. He was assigned the prisoner number 82 in the camp, where he spent three years. Later, he was sent to the Neuengamme concentration camp. He probably died in the Bay of Lübeck when the ships on which the German occupiers loaded the prisoners after their death march were mistakenly bombed. Ludwik’s belongings have already been returned to his relatives.

There was also a 17-year-old boy scout named Bolesław Hermanowicz in the first transport. He left behind a necklace with a cross and a watch. His mother, who searched for him after the war, never saw him again. Bolesław’s belongings were handed over to his family, thanks to the help of journalist Jowita Flankowska.

Wilhelm Tomasik, 25, from Cracow, was also in that transport. He survived Auschwitz, he survived Neuengamme, he survived the war. But he never talked about it at home, like many other former prisoners. Years later, his grandson found in our online archives information about his grandfather and the school certificate that Wilhelm had with him when he was sent to the camp.

Along with Ludwik, Bolesław, and Wilhelm, Waldemar Rowiński, Edward Golik, and Stefan Suderowicz were in the first transport. Their stories are told in the exhibition, too. We are still looking for their relatives to give them back the photos, certificates, watches and documents they had with them when they were sent to the camp.

Currently, the Arolsen Archives still hold around 2,500 items belonging to prisoners, including at least 900 from Poland. So many families still need to be found.

We encourage you to join the #StolenMemory campaign. Anyone can join the search, even without leaving home. If we had not been supported by volunteers so far, many families would not have been found. It is thanks to the zeal of individuals, students motivated by teachers, history enthusiasts and journalists that the search for these families is still possible nearly 80 years after the end of the war. Finding loved ones may take several weeks, but sometimes they are found within a few days.

The exhibition currently on view at the Auschwitz-Birkenau State Museum is also accompanied by an online exhibition.

Auschwitz-Birkenau Museum: Thousands of prisoners identified by name
To the Online-exhibition
Support us