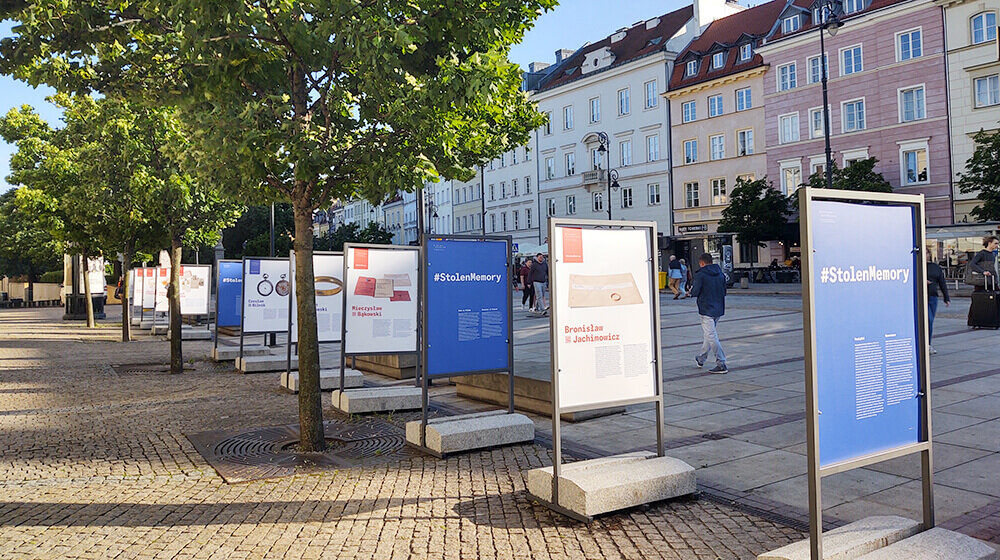 A new #StolenMemory exhibition will be shown on Warsaw’s Krakowskie Przedmieście boulevard over the coming weeks to commemorate the fate of 16 persecutees from Poland. It was opened by the Institute of National Remembrance in Poland (IPN) and the Arolsen Archives on June 14, 2021, to mark the 81st anniversary of the first transport of Polish political prisoners to Auschwitz concentration camp. The family of former concentration camp prisoner Franciszek Czaplicki also attended the ceremony, where they were presented with his pocket watch.

They came from various regions of Poland and were deported by the German occupying forces to concentration camps, where they were made to perform heavy forced labor. Many of them lost their lives; the fate of some remains unclear. The #StolenMemory exhibition in Warsaw tells the stories of 16 mostly young men and women whose personal items – watches, photos, documents, and jewelry – are stored in the Arolsen Archives. The SS took them away from people upon their arrival at the camps. Following the liberation of the concentration camps, these items – together with the possessions of thousands of other prisoners from all over the world – found their way into the archive, and the mission to return them to their rightful owners began.

The personal effects: A special collection

“We still have 2,500 of these items in our archive today,” said Director Floriane Azoulay at the exhibition launch. “We have been working particularly hard in recent years to find the families of these prisoners so that we can give their mementos back to them. Through #StolenMemory, we have already found numerous volunteers who are helping us locally with our search. Thanks to their support, we have already been able to organize the return of hundreds of items.” The #StolenMemory exhibitions do not just feature the biographies of persecutees and the stories of some of the items returned to families; they also expressly call on people to help with the search campaign for relatives.

Lots of helpers in Poland

Many of the personal effects belonged to Polish concentration camp prisoners. That is why we are so actively engaged in #StolenMemory in Poland. We have already held some exhibitions there and found lots of volunteer helpers. In cooperation with the German-Polish Youth Office (DPJW), we are also carrying out the campaign in the form a German-Polish youth exchange project. Together with the International Youth Meeting Center in Oświęcim/Auschwitz (IJBS), we have turned #StolenMemory into an educational project: Young people conduct research into the fates of people from the region and search for the families of persecutees.

The Warsaw exhibition features three former prisoners whose families have already been found. They include Franciszek Czaplicki, whose pocket watch was presented to his great-nephew Kamil Kaczyński and his grandson Andrzej Czaplicki at the exhibition launch. “After more than 75 years, it is a priceless experience to look at and hold something that belonged to our grandfather, great-grandfather, and uncle,” said Kamil Kaczyński. He had done some research into his great-uncle’s fate himself. He was then told by the IPN that the Arolsen Archives had documents and the pocket watch and even had information on where Franciszek is buried.

The exhibition launch was attended by numerous media representatives who were covering #StolenMemory and the fate of the persecutees and therefore encouraging more volunteers to help with the search for relatives. The Polish President Andrzej Duda had a letter read out in which he acknowledged the importance of the exhibition and the campaign for Poland. Here is an extract:

»The personal belongings of the persecutees are important mementos for their relatives. I am delighted that they are now being returned to their rightful owners and I hope that the exhibition increases interest in these valuable family artifacts and their extreme importance. May this exhibition be, above all, a homage to the millions of our compatriots and fellow citizens who lost their lives during the war and the occupation and who endured such unimaginable suffering.«

#StolenMemory will be on display until July 14, 2021, on Warsaw’s Krakowskie Przedmieście boulevard near the Royal Castle in the Old Town. There are then plans to display the exhibition in Gdańsk, Białystok, Poznań and Rzeszόw in collaboration with the IPN.

Recording of the opening ceremony
Support us